The Chautauqua Institution is a community/destination that blends the arts, education, religion, recreation and youth activities into one incredible place during the summer months. Although Chautauqua is open all year, the bulk of its activities are packed into a 9 week "season" during the summer. Any person from any walk of life can find some form of entertainment, recreation or relaxation here at Chautauqua.

It is so diverse that I really cannot describe it in a blog. I encourage you to check out the Chautauqua Institution's website at http://www.ciweb.org/ for a much better description of what it is about. And for more detail tune in to your local PBS station on January 31st at 10pm eastern time for well done documentary about us. If I remember correctly PBS shot over 70 hours of footage to make this one hour film. It should be very interesting.
Posted by Trevor Burlingame at 10:46 AM No comments:

What? No golf today?

I was going to take a nice scenic picture of all the snow on the course, but received this picture in an email this morning and liked it better. 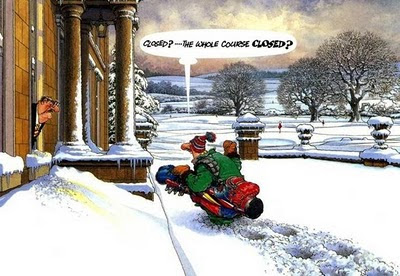 Posted by Trevor Burlingame at 10:00 AM No comments:

All is quiet in Chautauqua as the snow continues to fall. The thaw just before New Years was nice to get rid of a lot of snow, but still not enough to be able to see large amounts of bare ground.

Mid January here in the CGC maintenance world means finishing up golf cart winter maintenance and repair and Bill and Dan making the transition back to the main shop to begin work on the equipment. Off season care on golf carts is very repetitive and monotonous and by the time they get through roughly 160 golf carts (rentals, ranger, maintenance, etc), they are anxious to start something new.

Off season maintenance of our equipment has become a little easier in the last couple of years thanks in large part to our policy shift toward buying new equipment instead of used. We have fewer major repairs to do on our mowers since they are considerably newer and Father Time hasn't taken his toll on them yet. We still have several older pieces, and always will, but we are slowly making progress.

What does this mean to you as members and golfers? It means a well maintained golf course. There are fewer breakdowns and unsightly hydraulic leaks which lead to a better kept maintenance schedule.

I hope everyone is having a wonderful offseason.
Posted by Trevor Burlingame at 9:31 AM No comments:

The 2010 season had a great beginning with a March snow melt and a "first mowing" date of March 31st. This is 2 weeks earlier than we have been able to mow in the nine years I have been at Chautauqua Golf Club. This allowed us to get an early jump on course cleanup and our mowing schedule. The good late season weather from 2009 that allowed for a great leaf cleanup paid off in lessening the amount of work needed this spring.

The early start meant we were able to get an early start on our projects as well. The new blue tee on #15 Lake Course was shaped, irrigated and sodded in time for the NJCAA Championship as was the paving of some cart paths. 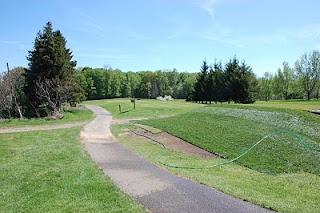 Bunker renovation and drainage continued to be a part of our focus and we tackled several with the cooperation of Dennis Dixon of Chautauqua Institution's buildings and Grounds division who lent us the use of their small excavator for several weeks during the season. Thank you, Denny! We were able to drain and/or renovate six bunkers during the season and sand added to several others as well.


Trees were pruned on several holes where they were restricting fair tee shots and the same company, Great Lakes Tree Service, ground several stumps throughout the course.

The woods between #7,8,& 9 Lake Course were thinned. The crew chipped away (no pun intended) at the project for several weeks and the area not only looks better, but will allow more air movement across the area and promote healthier turf on those greens.

After the early good weather, the season turned nasty from a turf health standpoint. Hot, humid weather with little to no rain dominated mid season making sustained turf growth very difficult. With the exception of some pythium (see an earlier post)disease loss in #5 Lake Course fairway, we managed to survive this period relatively good with little turf loss in non-rough areas.

We were also able to continue our trend toward buying new equipment opposed to older used equipment. Buying new has increased our productivity by keeping the equipment on the course instead of in the repair bay of the shop, a trend we intend to continue. This season's purchases included a new rough mower, a bunker rake, and a leaf blower. This fall also brought the news that we were approved to install a newer, larger, and more efficient irrigation pump station in 2011.

The season ended just as it started, with great weather for the respective season. This past November was one of the best in recent memory and several golfers took advantage.

Thank you to everyone for a great and enjoyable 2010 golf season and I look forward to another great season in 2011.
Posted by Trevor Burlingame at 2:22 PM No comments: